April 15, 2021 — The Ohio Library Council testified before the House Finance Committee this morning, at the request of the Chairman, to help clarify that Ohio’s public libraries are not directly receiving $170 million dollars from the federal government. 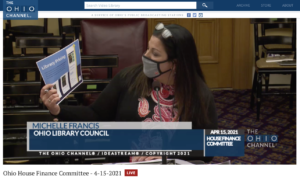 “Let me be clear, Ohio’s public libraries are not receiving $170 million in federal funding through the American Rescue Plan (ARP),” said OLC’s Executive Director Michelle Francis. “Instead, about $200 million will go to libraries nationwide through the federal Institute of Museum and Library Services (IMLS). Of that amount, the State Library of Ohio will receive an estimated $4.5 million to divide among university academic libraries, K-12 school libraries, prison libraries, and finally public libraries – our members.”

Francis explained to the committee that Ohio’s public libraries are separate political subdivisions and not a division of city or county government like many other states. Therefore, they will not receive the billions of dollars that other local government units are receiving directly through ARP.

Francis said that even though state revenues are currently coming in above estimate, funding for Ohio’s public libraries will be cut in the current state budget proposal.

“The Public Library Fund percentage will be reduced from 1.7% of the General Revenue Fund (GRF) to 1.66%. The base of the GRF will be impacted by the proposed income tax cut which will further compound reductions in funding for public libraries,” Francis said.

She told committee members that the demand public library services continues to grow as well as the costs associated with those services. Francis noted for example that digital circulation increased 33% and public libraries already pay up to five times more for eBooks than traditional consumers.

“Now is not the time to be cutting our state funding as public libraries assist in Ohio’s recovery efforts,” Francis said.

UPDATE: Rep. Rick Carfagna (R-Westerville), who is the Assistant Majority Floor Leader, has acknowledged that he will be submitting an amendment to maintain the percentage of the Public Library Fund at 1.7%. Any legislators interested in supporting this amendment should contact Rep. Carfagna’s office.